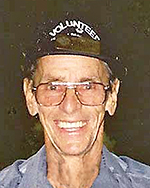 Bill volunteered over 3000 hours at Oscar Scherer State Park and over 6000 hours between Fort Clinch, Little Talbot Island and St. Joseph’s Peninsular State Park. And was a president of the Treasurer Island Chamber in Pinellas County.

He also volunteered at several Oregon State Parks and National Forests. He owned a Chevron station for 19 years, and was a partner in Island Rent-A-Car.

Bill was responsible for trained several volunteers at Oscar Scherer, who continued to carry on his good work for many years.